The Severn Deanery, under the South West Strategic Health Authority, was one of the first health sectors to sign up to the 10:10 carbon reduction campaign. It has been almost two years since we made the commitment to reduce are carbon footprint, and this is how we have performed.

We learned our largest area of consumption is heating and cooling office spaces, followed closely by lighting. 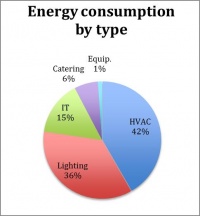 After labelling units and light switches and raising awareness with staff a spot check audit demonstrated improvements though we were still unable to get through to our visitors. When we looked at our actual consumption we found we had reduced our monthly use by 25% over two years.

The next step is to see whether we can purchase energy from more sustainable sources.

With the introduction of electronic initiatives such as “follow me” printing and access cards, the Deanery has managed a 16% reduction in printing costs between 2009/10 and 2010/11. This is set to continue further as “follow me” printing is fully implemented and close monitoring is possible. We have reduced stationary costs by 38% in the same period. These are the two largest budgets within the purchasing envelope.

The next challenge for the Deanery is to move to electronic filing. The School of Primary Care is leading the way, but paper is still a core part of all recruitment processes.

After a spring cycling campaign we compared the distances staff members were driving (car share excluded) for non-business travel in 2010 with 2011. We were really pleased to see a reduction in distances travelled, particularly around lunch times. This was due to an increase in cyclists and car sharing.

We also noticed the average engine size decreased by 1%, although this was from a combination of both larger and smaller engines.

The Deanery put in tremendous effort to improve the recycling facilities at the Deanery in 2009/10. We carried out an audit in 2010 and again in 2011. We were pleased to see a minor reduction in landfill and recycled waste overall, however the proportion of recycled waste actually decreased when compared with the proportion of landfill waste in 2011. As a result we have renewed our recycling campaign with fresh signage and more relevant information.